Medicine grew autonomously and started to think about its own methodological status before any other scientific or technical discipline. It differed from them and played a paradigmatic role in ancient Greece because it had a very effective test to validate its claims and theories: the life or death of the patient. From the dawn of the Greek world, it appeared with its full significance: the level of detail and knowledge shown by Homer in the Iliad and the Odyssey in the description of wounds and cures prompted a German scholar, at the end of the nineteenth century, to suggest a war doctor as the author of the two poems

Greek medicine was on the one hand the winning science of Hippocrates, and on the other hand the enormously influential activity of the sanctuaries of Asclepius and Apollo. Indeed it also branched out into local developments such as in Magna Graecia (‘Italic’ medicine), but a large number of independent doctors, working in major and minor centres, added to this more or less institutional activity. They did not write treatises nor did they leave direct evidence, and we must rely on numerous yet often difficult-to-interpret epigraphic remains and a few mentions in literary writings.

The ongoing activities at the ‘Forms of Knowledge in the Ancient World’ Research Centre currently follow four paths:

Epistemological consciousness and the development of the scientific method: the “birth of intellect” and of the inductive-deductive method, from its origins to the 5th century BC, within the ambition of ‘rational’ science to be able to know the nature of things, theorizing a general interpretive scheme of reality, building up a universal system of knowledge.

Empiricism: after Aristotle, an attempt at assessing the central role of the immediate relationship between the knowing subject and empirical data developed in polemics against causal investigation and the idea that it is possible to know the intimate nature of things and what escapes perception and therefore is not visible. Charles Dickens’ “Stick to facts, Sir” (Hard Times) could aptly be considered as the motto of medical empiricism, which was born in the Hellenistic age in Alexandria out of the Herophilean school and went on until Galen’s time.

Galen: the 2nd century AD was a turning point in ancient civilization, and it was at this time that Galen, like Ptolemy in astronomy, was regarded as marking the highest development of medical science, such that this inhibited any further development for centuries. He provided an attempt at medico-philosophical syncretism in which the Euclidean criteria of rigorousness and demonstrative consistency, based on axioms and definitions, are applied to medicine, so as to create a scientific system where medical knowledge could be reworked unitarily and acquire a logical-philosophical consistency. Galen is being investigated not only for his own doctrines, but also, on the one hand, for his valuable role as bearing testimony to earlier medical and philosophical thought, and on the other for his lexicographical activity as the author of a specific Glossary of Hippocratic terminology. 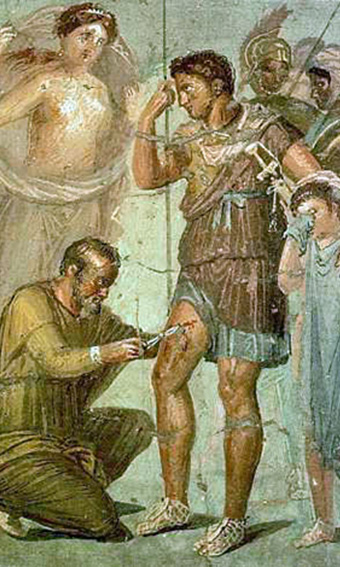