Among the main goals of the ‘Forms of Knowledge in the Ancient World’ Research Centre is the investigation of scientific concepts in a historical perspective. Many concepts of mathematics, medicine, geography or physics, when seen against the background of the time and place where they had their origin or early development, can reveal unexpected features that help to understand their sense and meaning also with regard to the science of our times.

Conversely, the meaning of the latest scientific achievements may affect the interpretation of the ideas that contributed to the birth of science and to the understanding of philosophical and theological thought in ancient civilizations. In many cases, exploring comparisons between different cultures can help us to gain insights that would otherwise be unattainable. Comparing ancient Greek, Chinese, Indian and Mesopotamian mathematics allows us to grasp the meaning of mathematical procedures which proved decisive for modern and contemporary science. The ritual and religious thought in India in the first millennium BC is also related to this meaning, as well as the ways of thinking of Heraclitus and Plato, Parmenides and Aristotle.

Otto Toeplitz and Hermann Weyl and, more recently, Abraham Seidenberg (a mathematician and historian of ancient science), Bartel L. van der Waerden (an algebraist and historian of science) and Donald E. Knuth (one of the fathers of computer science, with a deep knowledge of the ideas that have contributed to the development of scientific calculus since the mid-20th century, and an expert in Mesopotamian science) were all certainly aware of the links between ancient thought and modern science. The cases of research centres such as the Needham Research Institute in Cambridge (for ancient Chinese science) and the Max Planck Institute for the History of Science in Berlin have shown how crucial the interaction of scientific and philological expertise is.

In Greece, reasoning by analysis and synthesis, demonstrative methods and dialectical thinking largely owe their early development to mathematics. In addition to these, other less known but not unimportant forms of investigation have remained unchanged for centuries, and science has always made use of them, although often unwittingly, right up to the present day. Simple processes of computation, usually confined to specialists, often reveal important features of philosophical thought and substantial developments in Western science. Nowadays the decisive role of these processes in modern thought can be observed in the work of Viète, Leibniz, Newton and Lagrange: still for instance the importance of ancient algorithms for the formation of general concepts such as those of logos and apeiron (Greek for infinity) has not been adequately explored. Indeed the general notion of the algorithm, central to the science of the last century, owes its formation to the earliest developments of ancient Mesopotamian arithmetic, to Greek geometrical algebra and to Arab mathematicians. The fundamental connections linking algebra to geometry and to algorithmic thinking still need to be fully understood, and to this end the study of ancient thought will be a valuable tool. 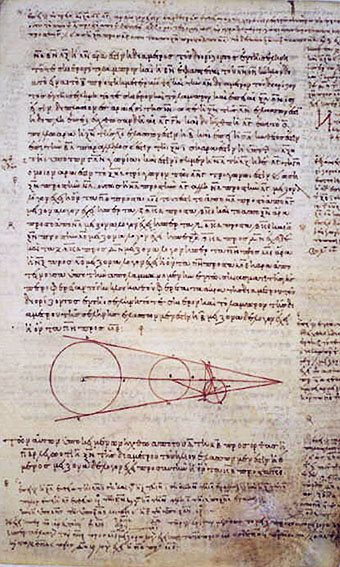